Looking for something that sits between the follicular statement of a full beard and the subtlety of stubble? Or maybe you like having a beard but your boss isn’t so buzzed about it? Then get shorty.

“Big beards take a lot of grooming, which takes time and care to maintain – especially the shape and fullness,” says Daniel Davies, General Manager, Pall Mall Barbers. “Shorter beards, however, are often easier to care for.”

“[A shorter beard] is a versatile look that can slip in with most hairstyles, and appear smart and rugged at the same time,” says Brady. Which is good news if you’ve been flouting employee conduct codes with a fuller style.

“The shape follows the face’s angles, and the beard is kept close to the cheeks, with the hair measuring around 1cm long. As the beard approaches the chin, it is left ever so slightly longer, in order to elongate the face and give the beard a better, more masculine shape.” Good growers, as it were. While a shorter beard won’t require you be the facial hair equivalent of Fabio, you’ll still need ample coverage.

“You need to be able to grow a full face of hair for this, as you want to avoid any patches and uneven lines,” says Brady. “In terms of face shape, generally speaking, this style is achievable and adaptable, and one we’ll be seeing plenty of in 2016.”

As the wise (bearded) man once said: “a watched beard never grows”. Or something like that. So you’ll be happy to hear it shouldn’t take much longer than a month to lay the foundations for this one.

It does, however, require upkeep once in full bloom. “You’ll need fortnightly trims, done either by your barber or at home with a set of decent trimmers,” explains Brady. “You’ll also need to keep your skin in good nick, so make sure you exfoliate and moisturise around the beard, and that you use a beard oil to keep the hairs hydrated.”

Bonus tip: “For extra definition above the cheeks, use a set of detailers to get a nice sharp line,” says Brady. “Leaving your hair to grow more pronounced on the upper lip provides contrast and shape,” says Brady, whether you choose to juxtapose it with an otherwise clean shaven face or a well-groomed beard. ILLUSTRATIONS BY LEON BOWERS FOR FASHIONBEANS

Not just Tom Selleck. Provided you have the wherewithal to grow one, and the patience to groom it, a moustache suits most men. And there are plenty of variations so you can tweak yours to your taste.

But do think about whether a moustache fits with your personal style before committing: “[A moustache is] probably going to work better with your look if you tend to dress yourself quite smartly – rather than wearing activewear and trainers,” says Brady.

Sit tight. Because this one’s going to grow on you. Literally. For about half a year. “The best way to grow a moustache is simply leaving it, for roughly 6-8 months,” explains Brady.

“Never trim above the lip; just train the hairs out to either side of the philtrum. You should use a moustache comb to straighten it out every now and then, and apply a wax to keep it in shape and glossy.”

Brady also recommends you regularly check in with your barber, not just for growing tips, but for pep talks, too: “A moustache can get quite annoying, and in the way of eating, drinking etc.”

If the prospect of a traditional ‘tache is too much, try softening the blow by framing it within an existing beard (above right). “It’s a modern take on an historic classic,” says Davies. Consider yourself follicly challenged in the face area? Fear not. We expect designer stubble – the style of choice for discerning men including Tom Ford and George Clooney – to soar in popularity come 2016. 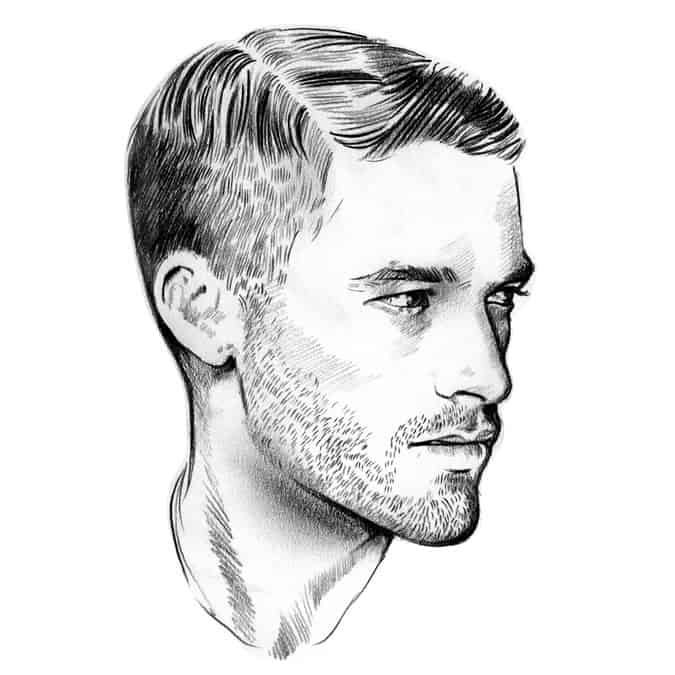 Anyone who can’t (because of genetics or workplace-related reasons), or doesn’t want to, grow a beard. “Stubble also suits a fuller face and stops it from looking so round as shadow and definition are created by the lines you’ll be shaving in,” says Brady.

And it’s versatile to boot: “This won’t dictate your hairstyle as much as having an actual beard would.”

“Allow your hair to grow up until it gets itchy, and note where your hair growth begins, ends, is patchy or uneven,” says Brady. “Use the lines created by your bone structure to help guide where you want to keep the stubble, and wet shave everything else.”

“Use a good quality safety razor for the cheek lines. When shaving down the stubble to the desired length, use a set of beard trimmers (probably about 3mm-5mm) and make sure to sanitise the guards and the actual razor head after use, otherwise it could pick up bacteria and cause irritation and/or infection.”

Alternatively – and especially if you suffer from shaving rash – try a short stubble beard without lining, but tapering instead. “This suits guys that have a chiselled face which needs softening,” says Davies. “Fade the neck and cheeks in on a shorter grade to soften the whole of face.”

If you do swap wet shaving for a short stubble beard, then remember to care for your skin. “You should use an exfoliator to lift the hair,” says Davies. “This prevents ingrown hairs and should be followed by a good light moisturiser worked into both the face and the stubble.” Sideboards, side whiskers, mutton chops. Whichever name you know them by, you’re probably at a loss as to why we’re suggesting you grow sideburns in 2016. But hear us out.

And it’s just the ticket if you’re itching to lose the beard in favour of something less hackneyed. Not everyone, obviously. But from a face shape suitability perspective, sideburns are pretty egalitarian.

Sideburns suit most face shapes, and are especially good for longer faces as they broaden the appearance of the face,” says Gibson.

As ever, it’s about growth: about two weeks to be exact. Once you’ve got some decent coverage, shave your face and neck, taking care to leave a good bit of wiggle room around your sideburns. Then, trim your burns to the desired length and thickness (the thickness of your sideburns should be consistent with the rest of your hair) and either taper them or give them a clean bottom edge.

“The length of the sideburns should reflect how subtle or extreme you want the effect to be,” says Gibson. “It’s always best to reference your choice of length with a feature on the face such as the lip line or jawline. Small clippers, or detailers, are good for maintaining the length as the blade is small but sharp and ideal for outlining.”

“It’s best to get your stylist to do this for you,” says Gibson. “Especially if you’re going to change from a full beard.”